Lock in, positive potential goals in life with target images 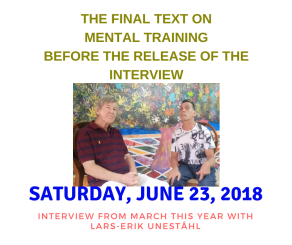 Lock in, positive potential goals in life with target images.

In 1990 I made a Mental 200 meter race in my mind. I was connected to ECG and other medical devices. When the tutor asked me to think I ran a 200m race. All instruments recorded as if I ran, in reality. The muscles reacted as if I ran and the waves of the brain had full activity.

The leader tells me that the time was 28.80 seconds. My best time then was over 30 seconds. So I ran faster with the thought and what I could physically do.

What I want to say is that you must have a picture / movie in mind first. It’s impossible to create something, if thinking is not there first. You must first create the image in mind that allows all sensors in the body to be activated. Because you then program your body, it will be natural to perform the image / film in reality. Just like my 200m race 1990 and then the performance 1996, on Paralympic.

I only have a scientifically concrete example with my 200m race. While Lars-Erik Uneståhl has done more than 1500 scientific studies that prove the mental ability, and using Mental Training, affect the system in a completely new way that gives incredible results. The studies are in many different areas.

A study in Iran is currently underway, where Lars-Erik Uneståhl was invited by Iran, which is being conducted by a doctor. A clinic in northern Iran has a phenomenon that all cancer patients die before the age of 20. This means that everyone who comes to the clinic will be subconsciously programmed to die before 20 years. Now everyone gets the opportunity to train Mental and it will be interesting to see if future patients live longer than 20 years. In the film released tomorrow, Lars-Erik tells me about this …

So no matter what area, you can program all the cells of the body to do something completely different to your current situation.

First, take a mental state of calm, as I described in the text yesterday. When you are in this state, then create positive goals. You focus on the image / movie in the mind of what you want to achieve. The more senses you mix in, the more effect. What does it smell like, how does it feel in the body and more? So when you are in this calm mindset, it becomes like all the cells in the body are there. The body can not differentiate if you are physically there or if you are there with the thought.

If you talk to someone who has phobia for spiders, for example. Only you mention the word, you see that the person stiffens in the muscles, the facial expression changes to horror and more. Though no spider is there. The body can not differentiate if you think of a thought or if there is actually a spider. Spider Phobia is very easy to program today, as I will not tell you in this series.

So clean mentally, you can program when to die whether you have cancer or not. This and other cases of age are discussed in the 42-minute interview with Lars-Erik Uneståhl tomorrow.

When I worked as a research assistant, one of Lars-Erik Uneståhl student professors, for almost 10 years. We test with the device different parameters how the body responds when you mentally ask the client to think about different things. You see the same second instantly, how the temperature changes in the skin, breathing, oxygen absorption and other measurable physical effects.

By stressing the system or making the system calm down, you’ll see how the body reacts. I have tested hundreds of people with this device. At that time very expensive.

Today, many people have some kind of resembling measurable bracelets that you can read lots of things that you can use to control your living patterns.

But in the 90’s when I worked with this there were no such bracelets. Everything was in the beginning and if I had known what I know today, I might have acted differently.

They call me the most-read non-professor. 10 and a half years of international university studies I would have to undergo to gain jurisdiction on something I already did. It was close that I started, but life took a different turn.

So when Lars-Erik Uneståhl comes to Thailand and CET (Center for excellent training) I get the opportunity to philosophize with him. Should really have recorded all our calls but tomorrow one of our meetings will be documented.

During these days before the interview release, I’ve only told a fraction of my previous background with mental training.

25-30 years ago, Mental training took a big part of my daily life. Partially professional because I was employed as a tutor on the subject and then my sports career.

Meeting with Lars-Erik is back looking for a bygone era. It’s really a privilege to get philosophized with him.

So tomorrow the first interview will be released with Lars-Erik and me. Maybe there will be more in the future …

What is Mental training? 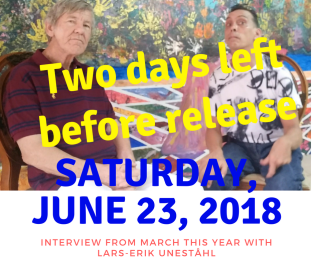 So what is “Mental training”?
To me, it’s a room in my mind where I go with my mind to program myself to different things. A room, your only i have access. This room creates calm in the body and I can recover much faster. When I’m in this mental space, nothing comes to me. What’s happening around me can not affect me. I can not hear the phone call or someone shouts my name. I am totally focused, in this room.

When I started seriously for Paraolympic 1988, I already had this space in my mind. For over 30 years, I have had access to a mental space to create my future reality. So how do I get there, to the mental room.

First, create a trigger that can calm down the system. Most often, the focus was on breathing. Focus on deep breath and maybe count. Close the eyes, and take in air and count the time to 4. Then blow out the air and count to 6. At the beginning you may enter air counting 2 and then 4 on exhalation.

This is like a trigger for the system to prepare for the next step. If you do not have access to Mental CD or audio recordings, I recommend that you record yourself and listen to how to guide yourself with breath. This can take 3-5 minutes before you have a rest in your body.

Then it’s time to take your mind into a mental room where you can program things for the future or just feel calm before the day.

The way the room looks is so different for person to person.
Many used water flow on your way. A babbling brook, where there are different leaves with pictures of problems in life. The leaves continue only with the brook and disappear forever.

Then you will find a house and enter the door of your mental room. There is total peace in the room. This is like a movie played in your head and it’s good if you listen to someone who guides you. Or record yourself.

Few people I meet can not create pictures / movies in mind and then you have to find other solutions. But everyone can do this and it costs nothing

Over the years, you will be able to get to the room to better control the situation you are in. After you’ve been in the room, it’s like, you look better (the sky is blue and more).

I only need 5-10 seconds for the whole process, but I have been training regularly for 30 years. So I can stand on a messy street in Bangkok and get back all the quiet in 5-10 seconds.

The last step in the room I recommend that you have a magic box or something you add, energy. You lift this box and get as a beam full of positive energy that fills up the joy of life and all the positivity on earth. Do this just a few seconds. It is enough.

The final step is to take a deep breath and open your eyes to be back in real life.

Regular exercise is required in order to effect. If you want to run a marathon, it is not enough to practice some time and again. Without a regular exercise. Same with Mental Training. It is a training you will benefit from the rest of your life.

For more information contact SLH: https://www.slh.nu/om-slh/kontakt/
Click on any of the email addresses and write in English so they can help find the right one. SLH is the university Lars-Erik Uneståhl talks about in the interview, which is released in two days.

Barbro Bronsberg has done CD / MP3 with different topics I can highly recommend. Sold in more than 100,000 copies:
http://www.barbro-bronsberg.com/CD-avslappning.html

Relaxing for children I can recommend, Christina Diven:
http://christinadiven.se/avslappning-for-barn/ 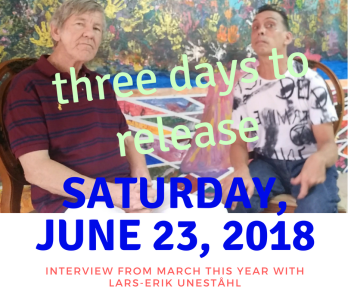 In three days, I release an interview with a giant in the sports world on my YouTube channel. An anonymous public figure, because he is behind the scenes and maybe in your “Mental Space”. He has researched something called “Metal Training”. The word is used a lot. Now during the World Cup, I hear the word every football match, via the BBC, CNN and other major media.

They talk about the mental strength a player has. All explored with scientific basis in the 70’s and 80’s, the metal training boom became global.

Today there is no national team or sports club in the world at high level, which does not use Lars-Erik Uneståhl’s method.

So Saturday, June 23, 2018, I will leave an interview from March this year with Lars-Erik Uneståhl …

15 minutes free talk over skype. Artist Mikael Avatar offers a free life coaching conversation with you. No behind thoughts or sales To book click the link here:

Artist Mikael Avatar was born and raised in Sweden and since 2009 live full-time in Thailand. 30 years working as a coach Over 20 years, appreciated, Public Speaker Former world record holder in the long jump at the Atlanta Paralympic Games in 1996 Last 10 years active with the creation of the art form Energy Art. Several exhibitions in Thailand and also Sweden He has resumed music creation and make your own movies with music He has the ability to capture things in life, which looks obvious out. But he gives these small things, a different meaning, and suddenly there appears a whole new meaning in life.